Eric Lund Reflects On 20 Years at MedSource: “I Just Didn’t Know Which Spring!” MedSource President and CEO Eric Lund recently sat down for an interview with Sumus CEO Jim Baker to reflect on 20 years of entrepreneurial leadership. The standout takeaway is that when Eric has stood at uneasy and unclear crossroads in his career—namely the creation of MedSource in 1997, and an existential company challenge in 2009—the instrumental factors have been faith and decisiveness. 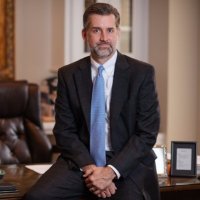 Early in his career, Eric had already observed how the people around him in the clinical trials industry were affected by their jobs. He saw the work as “consuming massive amounts of time, giving little autonomy. I didn’t like how employees treated each other, the office politics. There had to be a better way to do this.” From there, he went on to describe the origins of MedSource.

He recalls busily working as an independent contractor when he reached an ironic crossroads in his career: he was offered the “perfect company job that aligned with [his] values.” He remembers: “It was really tempting. For three days, I could not sleep. I could have a good career; the opportunity represented stability.” But he also had designs on starting his own business.

Eric wrestled with the idea of security for his family, with benefits and a clear predictable path. He felt a “peace” when things became “crystal clear” after prayer; God assured him, “Your security is in me.” So, at age 29, “young and foolish,” he set out on his own. With a “couple thousand dollars” and working out of his home (for four years), Eric turned his vision into reality.

Interestingly, he describes the concept of MedSource as “a bit of an experiment. You could drive with good values and hard work; you could be foundational and make a mark in the industry by hiring the right people and making decisions with their best interests in mind.” Eric did those things, and the company grew and thrived; however, it was not a simple ‘happily-ever-after’ story, as there was another challenging crossroads moment to come.

When asked about his biggest success, he provides an unusual answer: “We nearly imploded. We were a company of 45 in 2009, and then lost 85% of our revenue in six months.  Our three largest programs were halted due to study results and the pharma market was extremely quiet. We got down to 11 people.” Two major factors led to the crisis: externally, the global economic downturn led to recession, and inside the industry there was major consolidation occurring.  “In addition to the economic downturn, several key clients were bought by large organizations who internalized the work we were doing.  It was as close to a perfect storm as you could get.” On top of all of that, a key person in the company was not performing even remotely up to standards. Eric remembers, “We were taking losses like water through a sieve and we couldn’t immediately see an end to it. It was disconcerting and I asked myself if we were supposed to stick this out.”

Once again, Eric turned to his faith, and as before, he received an answer: “It is going to turn around in the spring.” He quickly adds with a laugh, “I just didn’t know which spring!” After a tough year with “six or seven bid opportunities and no business, we then had 87 bid opportunities and won 60 of them.” MedSource was on its way again, and today has 145 team members, several offices, and has expanded to Europe. What happened to spark the turnaround? Eric was resolute and made the tough decision to part ways with people who were detracting from the mission. “We had some key people that did not fit well with our culture or our core values and so I opened them up to opportunities outside of the company.  We also diversified our services and capabilities.”

When asked about the larger purpose of his life, his answer summarizes his whole journey: “It isn’t really about me. It is about the impact on others around me.  It’s about making decisions with others’ best interests in mind.  I am one of 7 billion people, so with each one I encounter, I try to leave them better than when I met them.  Hopefully the same thing happens to me.”